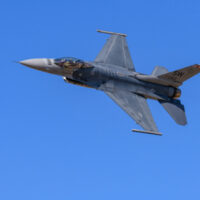 A grieving widow filed a lawsuit after her husband was killed in an F-16 crash against the maintenance company that was contracted to repair and maintain the plane. The lawsuit, which was initially filed in federal court, was dismissed after the court decided that the plaintiffs had failed to show in any meaningful way how the plane mechanics failed to properly maintain the plane.

She is now asking the 11th Circuit Court of Appeals to overturn the decision and allow the case to move forward.

Retired Air Force Lieutenant Colonel Matthew LaCourse was doing training exercises when the plane crashed into the Gulf of Mexico. He was killed.

An accident investigation board ruled that LaCourse became disoriented after performing maneuvers and lost control of the plane. LaCourse’s widow disagrees with the board’s finding. She believes that the crash was caused by a malfunction in the plane’s hydraulic system.

At issue is whether or not the plane maintenance company complied with Air Force regulations regarding plane maintenance. If it can be determined that there was 1) a failure to maintain the plane according to Air Force specifications and 2) this failure was the actual or proximate cause of the plane crash, then the suit will be allowed to move forward with the second question being left to a jury to decide.

The lawsuit was initially thrown out based on the fact that the plaintiff had failed to reasonably establish that the plane’s failure was related to the company’s maintenance of the F-16. The plaintiff contends that the maintenance company failed to address 16 malfunctions that occurred days before the crash. The plane appeared to have chronic problems that were ostensibly addressed and corrected by the maintenance company. However, the fact that the plane went down makes the issue suspicious. The plane had two issues prior to take-off but managed to pass pre-flight tests.

The panel will decide whether or not Air Force regulations required the plane to be grounded or if the mechanics had leeway to decide whether the plane was fit for flight. If the plane was deemed to be fit for flight by the contractor, then are they responsible for the crash? Maybe not. If they did not have discretion as per Air Force regulations then that may provide the plaintiffs with a better argument.

Despite this evidence being presented to the court, the case was dismissed. An attorney for the plaintiff said that the circuit court judge simply accepted the contractor’s argument that the issues were addressed and corrected. However, if the contractor followed Air Force guidelines, then the case may not be allowed to move forward.

If you’ve been injured due to the negligence of another person, call the Jacksonville personal injury attorneys at Gillette Law today. We can help you recover damages for medical expenses, lost wages, and decreased quality of life.