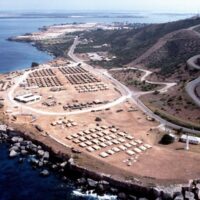 The family of a civilian contractor has filed a wrongful death lawsuit against former Guantanamo Bay commander, John R. Nettleton. The story begins after Christopher Tur’s body was found in shallow water. An investigation determined that Tur had drowned, but he sustained significant physical injuries for which the drowning explanation did not account. Captain John R. Nettleton was charged and convicted with impeding the investigation into Tur’s death. He was sentenced to two years in prison. He is now one of three named defendants in a wrongful death lawsuit. Lara Tur Sabanosh, Tur’s widow, is also named in the lawsuit along with the PR coordinator from the base. The lawsuit was filed on behalf of Tur’s mother and siblings.

Tur was found dead on the base. The cause of death was ruled a drowning, but Tur had sustained several injuries, including broken bones. Nettleton was convicted of making false statements and obstructing justice during an investigation into Tur’s death. Nettleton was not charged in relation to Tur’s death, only the impeding of the investigation. Prosecutors did not believe they had enough evidence to convict Nettleton of Tur’s death. In a civil lawsuit, the plaintiffs will need to prove that Nettleton is “more likely than not” responsible for Tur’s death, as opposed to the “beyond a reasonable doubt” standard imposed in criminal cases.

The lawsuit states that Nettleton is responsible for Tur’s death and alleges physical assault, intentional infliction of emotional distress, and tortious interference with a corpse.

What About the Wife?

The wife is named in the lawsuit because she was having an affair with Nettleton. Nettleton admitted to the affair. The plaintiffs believe that the affair sparked a fight between Nettleton and Tur that ended with Tur’s death. The PR spokesperson for the base is believed to have helped the wife and Nettleton cover up the murder.

While a huge payday may not be in the cards for the family, the family wants the opportunity to depose the three named defendants under oath so that the family can get closer to the truth. Indeed, there is enough evidence to support allegations against Nettleton, his wife, and other coconspirators, but getting a conviction at trial without ample physical evidence could be difficult, especially with this defendant who is a highly respected serviceman. Nonetheless, the problem for the defense would be that they could not reasonably conjure another reason why a civilian contractor whose wife was having an affair would die a violent death. The conspirators hoped to get the ME to play along, but discrepancies in his findings later led to the knowledge of the affair. That means motive. If not Nettleton, then who? Obviously, the defense will likely claim that Tur killed himself after learning of the affair, but people who kill themselves don’t break their bones and then drown.

If you’ve lost a loved one to an act of negligence or malice, call the Jacksonville wrongful death attorneys at Gillette Law today to schedule a free consultation and discuss your situation in greater detail.