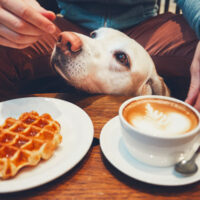 Most of the time, dog bites occur in parks, outside homes, in backyards, or around homes. However, there is a new type of dog bite lawsuit that we are seeing more and more of. Those are dog bite lawsuits filed against proprietors alleging that they negligently allow dogs on their property. Instead of suing the dog’s owner, who may or may not be able to pay their way out of the suit, they sue someone they know can pay their way out of the suit: A major corporate coffee chain like Starbucks.

The question is: Is this a valid lawsuit? The answer could be tricky.

Most dog bite lawsuits are not negligent security lawsuits. Dog bite lawsuits are filed against a homeowner’s homeowner’s or renter’s insurance policy. In Florida, dog owners are “strictly liable” for dog bites. That means that the plaintiff need not prove negligence, they need only establish that the dog bit them and they were not aggravating or provoking the dog in the process.

A girl and her mother were sitting at the patio at Starbucks when the 5-year-old attempted to pet another customer’s dog. The dog attacked, causing lacerations to the girl’s face and potential nerve damage, according to the complaint.

The plaintiffs contend that Starbucks is responsible because they allowed unleashed dogs on the premises and failed to warn customers that unleashed dogs were allowed on the premises. Starbucks responded to the lawsuit with a motion to dismiss on the basis that it has no legal responsibility for dogs brought onto their property. Starbucks further claims that the victim and the dog owner knew one another and that the victim refused to name the dog owner in their lawsuit.

The lawsuit is being filed in Alabama, where plaintiffs must contribute zero liability if a lawsuit is allowed to proceed. It remains unclear that Starbucks can be held liable for a negligent security lawsuit unless dog bites were common on their premises. The prospects of winning this lawsuit, especially in Alabama, are quite grim. The plaintiffs would need to prove that Starbucks had cause to know that dog bites were a major problem. Essentially, a victory for the plaintiffs would mean that Starbucks has an obligation to enforce no-dog rules on their property.

If you’ve been injured due to a negligent dog owner, you can file a lawsuit against the negligent party and recover damages related to your medical expenses, pain and suffering, and lost wages. Call the Jacksonville personal injury attorneys at Gillette Law today.