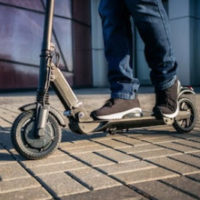 In case you haven’t been to Disney World in a while, scooters have become a pretty big deal there. By the time the park has opened at 9 am, half the scooters are already gone. More folks bring scooters into the park that they’ve either rented elsewhere or purchased themselves. For the renters, you have to be 18 years of age or older to rent a scooter. But for those who’ve purchased their own, you can be any age at all. For some folks, they’re the only way they’d be able to get around on the massive Disney grounds.

On the other hand, those who aren’t on scooters generally consider them the bane of their existence. Recent fury in cities like Los Angeles and San Francisco have underlined the need for regulations concerning scooters including prohibiting those under 18 from renting them and defining where scooters can and cannot be ridden. At Disney, it’s more of the same problem. Unruly scooter riders are causing accidents with guests on foot and now those guests are hitting back with lawsuits.

For those wondering why Disney doesn’t just ban the scooters, lobbyists have done a good job positioning scooters into the same space that wheelchairs have. In other words, they’re considered vehicles to aid those with disabilities. Because of this, they cannot be banned by the theme park any more than the theme park can ban wheelchairs. Scooters are protected by the same federal laws that protect those with disabilities.

So what can Disney do? Well, one possibility would be to post a speed limit for scooters or limit their accessibility to pedestrian heavy places (like sidewalks). However, any such provision would require the U.S. Department of Justice to sign off on the measure. While cities like San Francisco can establish measures limiting scooter access, private businesses, even ones as large as Disney, have to obey specific provisions set forth by the Americans with Disabilities Act.

Will Disney be Held Liable?

This is hard to say. Since Disney is restricted on whether or not they can ban scooters wholesale and any provision they introduce must be signed off on by the Department of Justice, Disney can argue that they have no legal remedy to prevent such accidents from occurring. This would, essentially, flatline any attempt to sue them for negligence. On the other hand, if the plaintiffs can show that there are reasonable measures that they could take to prevent such accidents from occurring then they may have a case against Disney. These plaintiffs still can opt to sue the scooter rider in the event that they caused their injuries but why sue a scooter rider when you can target one of the largest corporations in the United States? No doubt Disney is bringing this point along with them to court.