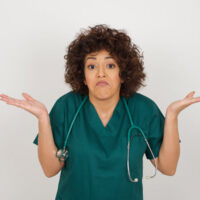 One of the best ways to handle a claim of personal injury against you is to ignore it completely. Of course, the courts prevent this strategy from working indefinitely. In a recent lawsuit, an attorney representing the mother of a 7-year-old girl who died during a routine surgery sent out several requests for the girl’s medical records. The hospital assured the plaintiff they would send the records, but a year later, the plaintiff has not received the records.

The girl had her appendix removed when she began suffering further complications. She went back to the doctor where they diagnosed her with pinworms without performing a physical exam. The girl died days later and an autopsy revealed that a perforation in her bowel caused her to become septic. In other words, a medical examiner has already determined that the cause of death was related to an untreated bowel perforation that occurred during surgery. Because the error was related to the surgery, the surgeon is responsible for the death. The surgeon would need to prove that the medical examiner is wrong and that the girl died for some other reason. Since the bowel perforation is proven, it doesn’t seem reasonable that the hospital will be able to produce an actual defense to these claims.

Further, the hospital is claiming that the wrongful death statute under which the lawsuit was filed is unconstitutional. This is not the first time a defendant has made this claim against Alabama’s wrongful death statute. It didn’t work, but it forced the plaintiff to wait years until the case made it all the way through to the State’s supreme court. The Supreme Court affirmed a verdict in favor of the plaintiff. In that case, it was another medical malpractice lawsuit.

The case involved a $20 million verdict reached by the jury that was reduced to $4 million by the trial court judge. The defendant appealed the verdict hoping to reduce the award to $1 million, the limit of the policy. The Supreme Court ruled that the doctor’s insurer had an opportunity to settle the case for the policy limit and rejected that offer. They rolled the dice at trial and lost four times as much money. Then, they wanted to go back and reduce the award to the settlement offer. The court said no.

A trial date has been set for 2023. The hospital has two weeks to turn over the medical records.

If you have been injured due to the negligence of another party, call the Jacksonville personal injury attorneys at Gillette Law today. We can help recover damages related to your injuries and hold the negligent party accountable for their conduct.