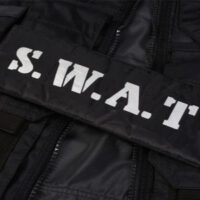 On Friday, the ten members of the Hallandale Beach SWAT all resigned at the same time amid the George Floyd protests. The SWAT team was the target of a wrongful death lawsuit after they raided the house of Howard Bowe in 2014 and shot him dead in his kitchen. He was unarmed. Protesters at the most recent George Floyd protests brought the incident to the attention of the public.

The SWAT team issued this statement in response: “The risk of carrying out our duties is no longer acceptable to us and our families.” They further discussed the “anguish and stress” of being “called to serve” when they’re being condemned in the press.

The SWAT team showed up at Bowe’s home at 6 a.m. They shot and killed his pit bull (which was chained), broke down his door, used a stun grenade and then fired a single bullet into his chest. Bowe, of course, died eleven days later in the hospital.

Police were serving a search warrant at Bowe’s home as part of a narcotics investigation. They ended up recovering about 18.5 grams of crack.

Bowe’s family has filed a wrongful death lawsuit against the four officers involved in the shooting. One of those officers, Christopher Allen, was among the signatories on the resignation letter.

The lawsuit makes several allegations. Among those, the military-style tactics used in the raid were completely useless to the supposed task at hand, which was apprehending Bowe as part of a narcotics investigation. The lawsuit also alleges that the cops used unnecessary violence on Bowe’s 16-year-old son who had just witnessed his father’s shooting. The lawsuit alleges that the police dragged Bowe’s son from his bed and carried him over his father’s dying body. It is also unclear why the police chose to shoot Bowe’s dog when it was chained up.

A Broward County Grand Jury refused to file charges against the officers, determining that the use of deadly force was justified. Bowe’s family was awarded a $450,000 settlement in the case in 2018.

Hallandale Vice Mayor Sabrina Javellana was among officials who spoke out against the slaying when the settlement was awarded. She also protested against it on Monday and that may have prompted the SWAT team resignation. Javellana was specifically mentioned in the resignation letter as accounting for several of the officer’s frustrations. The SWAT team accused Javellana of making “ignorant and inaccurate statements attacking the lawful actions of [the SWAT team]. Javellana was among those who called for a reopening of the investigation into the SWAT team members. Javellana, in a statement, said that she met with Bowe’s sister at the protest.

If you’ve lost a loved one to the negligence or malice of another person, call the Jacksonville personal injury attorneys at Gillette Law today to schedule a free consultation and learn more about the services that we provide.

By Gillette Law, P.A. | Posted on August 6, 2020
« Are Companies Responsible for Workers Who Get Coronavirus?
Fort Walton Beach Among Named Defendants in Wrongful Death »