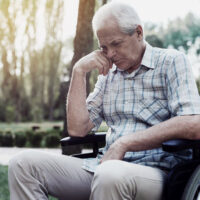 A bizarre lawsuit has been filed against an ambulance company after a man was dropped off outside the wrong house. The descendant had just received dialysis treatment and was left in a wheelchair outside a house numbered 223. His address was 233. No one attempted to alert anyone that their loved one was home. The man remained in a wheelchair outside of the wrong house unable to communicate or alert anyone. Eventually, a neighbor called the police when she noticed a man in a wheelchair who wasn’t moving and had his head down.

According to the lawsuit, the descendant spent hours outside the wrong home in the August heat. The driver never alerted his family that he had been dropped off. An autopsy determined that the man died of sepsis. He was 67 years old.

It seems unconscionable that a driver would dump a patient in front of a house without alerting their family that the loved one has been delivered. So, ultimately, that is where the liability will be focused. The fact that the man was dropped off at the wrong house is troubling, but folks transpose numbers all the time. Mistakes happen. When the patient was not immediately taken into the home by relatives, why did the driver not call contacts or attempt to ensure the man was taken care of? That, ultimately, will be the basis for the wrongful death lawsuit.

Is this a medical malpractice lawsuit?

In this case, the decision to dump the patient off at a home that wasn’t his where no one was there to take him, was not a medical decision. Nonetheless, the decision not to alert the family resulted in the death of the descendant.

Gillette Law files wrongful death lawsuits on behalf of the estates of victims of culpable negligence and their families. Call our Jacksonville personal injury attorneys today to schedule a free consultation and discuss your options in more detail.