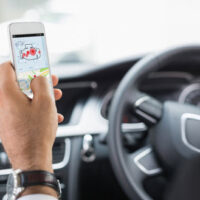 When it comes to rideshare and similar services, there have been quite a few bumps in the road in terms of lawsuits and legislation. In the early days of Uber, lawsuits were filed against the company claiming that their app was forcing drivers to rush to avoid bad marks on their record. Uber made changes to the way the app worked and settled most of the lawsuits related to accidents caused by drivers. It also changed the way Uber insures their drivers. Prior, Uber was not taking liability for any of the accidents caused by their drivers. Today, there is a special policy in place to insure their drivers.

Doordash is now facing a similar lawsuit claiming that they frequently text their drivers while they are driving. In one case, this resulted in the death of a pedestrian. The attorney who filed the lawsuit against Doordash blames the app and the company, not the driver, for the accident.

Doordash expects its employees to break the law

The attorney for the plaintiff contends that Doordash expects its employees to disobey prevailing traffic laws. In California, where this lawsuit has been filed, texting while driving is illegal. In Florida too, it is also illegal. No employer can ask their employee to do something illegal. Moreover, Doordash’s business model is “predicated on speed” which forces drivers to take unnecessary risks. This is the foundation of their lawsuit. While the lawsuit is seeking both compensatory and punitive damages from Doordash, it is also seeking injunctive relief. What does that mean? The attorney who filed the lawsuit against Doordash has asked the court to force the company to implement changes that would prevent more accidents like this one. That includes updating their app, not texting drivers while they are on delivery, and doing a better job vetting their drivers.

According to the lawsuit, Doordash failed to adequately vet the driver prior to allowing her to make deliveries for the company. The driver had a history of moving violations and an out-of-state license which she never updated upon moving to California. Before allowing the driver to make deliveries for the company, Doordash never inspected the driver’s vehicle, interviewed her in person, or recommended that she install a hands-free mount. The pedestrian was struck at full speed by the driver who only noted the woman after she was struck.

Gillette Law files lawsuits on behalf of injured plaintiffs and grieving family members in wrongful death lawsuits. Call today to schedule a free consultation with our Jacksonville personal injury lawyers and learn more about how we can help.