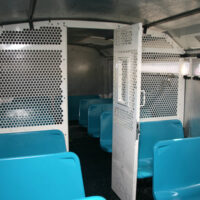 The family of a woman who drowned while being transported in a sheriff’s office van has recently settled a lawsuit with the manufacturer of the aluminum cage in the transport van. The incident took place during Hurricane Florence. The family was awarded $1 million for the death.

The lawsuit against the county names two former deputies involved in the transport of the victim. The deputy who was driving the van is blamed for making a conscious decision to drive around a barricade onto a flooded roadway. Both the driver of the van and his fellow officer were terminated for showing deliberate indifference to the plight of their passengers. A grand jury chose to indict the officers for criminal negligence.

The case against the cage manufacturer

The lawsuit against the cage manufacturer was tried on the grounds of product liability. The company manufactured a cage with only one entrance and exit that essentially trapped the two female prisoners in the van as they were drowning. The case against the company that manufactured the cage is the weaker of the two claims, but the company willingly settled for the policy maximum.

The case against the county

The only satisfaction the victims may receive is the criminal lawsuit putting the deputies behind bars for recklessly endangering their passengers and then failing to render aid as they drowned. The county is likely protected from a major settlement award by sovereign immunity meaning that even though the plaintiff’s claims against the county are stronger, the award may only be a quarter of what they got from the cage manufacturer.

If you’ve lost a loved one due to the negligence or malice of another party, you are able to sue for emotional grief and hold the negligent party accountable for their negligence. Call the Jacksonville personal injury attorneys at Gillette Law today to schedule a free consultation and learn more about how we can help.