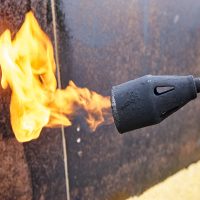 This is a weird one, so let’s start with the rabbis. The rabbis have been criminally charged with negligent homicide after attempting to cleanse the nursing home with a 20-pound blowtorch in preparation for Passover observance. The rabbis and the nursing home are being sued by the family of a 35-year-old firefighter who lost his life when the ceiling of the building collapsed on him. Emergency services had been called to the scene to evacuate the facility of more than 110 residents. Many were injured from burns and smoke inhalation and at least one firefighter lost his life. A 72-year-old nursing home resident also lost his life in the fire.

The family is suing the rabbis, the facility, state inspectors who cleared the facility without reporting dangers, and some employees of the facility are also named in the lawsuit.

The rabbis are directly responsible for the fire and face criminal charges related to the incident which was obviously an accident. In order to prove negligence or manslaughter, the state must establish that the rabbis acted with a wanton disregard for the rights or safety of others. In other words, they acted so recklessly that they made it obvious that they didn’t care about starting a fire and injuring residents. Acting incredibly stupidly is not culpable negligence. Culpable negligence occurs when someone drives their car 100 mph in a residential area. They know their conduct can harm others, but they just don’t care. It isn’t the same as intending to kill someone intentionally, but it’s close. Manslaughter does not occur by accident. It occurs because someone doesn’t care about the consequences. This seems like it would be difficult to prove given the circumstances.

The facility failed to oversee the rabbis as they were blowtorching the ovens to ensure they were pure for Passover. This created a dangerous condition that caused injury to both emergency responders and the facility’s residents. Additionally, building code violations and regulatory violations are common in nursing homes owned by this group. So long as the violations relate to the spread of the fire, the nursing home can be held liable for the fire. Ultimately, the nursing home had a duty of care to ensure the cleansing was done safely.

One nursing home employee was accused of putting the emergency signal on hold while the rabbis were cleansing the ovens. He was charged with a misdemeanor, but the charges resulted in an ACD. Another employee, the administrator was charged with allowing the rabbis to cleanse the ovens without the proper permit. Two state officials responsible for inspecting the nursing home are also facing criminal charges. Prosecutors claim they filed false reports with the state to move the inspection forward. Both inspectors continue to work for the state doing inspections.