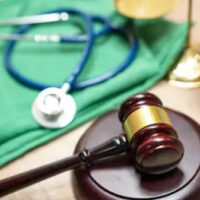 The parents of a two-year-old have filed a lawsuit against the University of Florida Health after their two-year-old died as a result of complications related to whooping cough. According to the family, the hospital failed to timely diagnose the girl’s condition and then sent her home without further remedy after falsely registering her as “uninsured”. The girl later died of whooping cough. The lawsuit also names the doctor, a nurse, and other staff of the hospital.

UF Health said that they will not comment on pending litigation.

There are two elements to this case that bear noting. First, you have medical malpractice allegations. The family blames the hospital for failing to detect whooping cough and discharging the patient without remedy. The second element involves a question related to the girl’s insurance. The plaintiffs appear to be dropping the claim that the hospital failed to render the prevailing standard of care because the girl was uninsured. Of course, the girl was not uninsured, she had insurance, but the plaintiffs believe that the hospital believed that the girl was uninsured and that impacted their decision to discharge the child without remedy.

A third element is the whooping cough which children should be vaccinated for at around 2 months old. In this case, the parents appear to have failed to vaccinate their child. That also resulted in the child’s death.

Who is Responsible: The Parents or the Hospital?

That question will be decided by a jury if the lawsuit isn’t settled first. The plaintiffs have to overcome the fact that they failed to vaccinate their children. A hospital would not likely diagnose a child with whooping cough figuring that they have been vaccinated at around 2 months when the CDC recommends vaccination. Looking for whooping cough in two-year-olds may not necessarily be the prevailing standard of care. One would assume, however, that there would be a note in the child’s chart that either didn’t show an immunization record or stated outright that the child had not been vaccinated. If the hospital didn’t bother to review the patient’s charge before discharging her, then that is medical malpractice, regardless of whether or not the parents vaccinated their child. However, the parents are at least partly responsible for their child’s death as well for failing to vaccinate her, and that is precisely what the defense will argue. Florida courts can assign part of the blame to the plaintiff and part of the blame to the defendant. We can’t be sure how this will split, but the plaintiffs likely will not hold the defendants 100% accountable.

If you’ve been injured due to the negligent practice of medicine, the Jacksonville personal injury attorneys at Gillette Law can file a lawsuit on your behalf and collect damages related to lost income, loss of a family member, past and future medical expenses, and reduced quality of life. Call today to learn more!

By Gillette Law, P.A. | Posted on November 24, 2021
« Son Files Lawsuit After Mom Beaten To Death At Nursing Home
Mother Drops Wrongful Death After Son Is Shot Outside Of Restaurant »