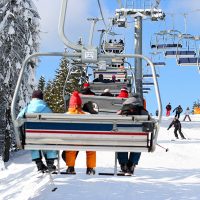 A lawsuit was filed after a mother and her two children fell from a ski lift. The mother died of injuries related to the fall and one of her daughters had to be airlifted to the hospital. According to the lawsuit, the chair collided with an air tower resulting in the fall.

An investigation conducted by the state concluded that the cable car’s motor was not properly calibrated to the lift at the time of the accident. The drives that power cable cars are used for multiple devices and the manuals offer a range of recommendations. The investigation concluded that the speed of the lift played a role in causing instability that ultimately led to the accident.

In 47 years, there have only been 14 deaths related to ski lifts. Hardly any of those have occurred over three decades. Most occurred in the 70s and 80s. The situation is rare enough that authorities will assume the responsibility falls on the ski resort when an injury or death does occur. In this case, the matter settled under seal, so we don’t know what the plaintiffs are getting in terms of compensation, but it is likely to be a lot of money. Below, we’ll discuss why.

Understanding damages in this lawsuit

You have two injured children and one deceased mother. The two children required medical attention and now have to live with the trauma of nearly dying and seeing their mother die at the same time. The mother likely contributed to the family’s finances, so the support she provided to the family will need to be compensated as well. The father can sue for emotional grief and lack of consortium while his children can sue for emotional grief and lack of familial guidance. The pain and suffering of the surviving family members is compensable. So, with two injured children requiring medical expenses and suffering profound trauma, you would have a case that settles in the millions of dollars. However, once you add the wrongful death, the damages are likely to exceed $5 million.

The ski resort is responsible for failing to correctly calibrate the cable cars and allowing three individuals to fall from the lift. It is unclear if there were any other defendants named in this lawsuit. Occasionally, you’ll see cable car manufacturers blamed for a death, but in this case, the tech itself was sound, almost never causes injury, and a failure to properly calibrate the tech resulted in the death and injury. So, it’s likely that the ski resort was found liable for allowing the plaintiffs access to a dangerous cable car they could not have predicted would fail. Ultimately, that’s enough to prove negligence in a civil action and so the case settled under seal.

Gillette Law files wrongful death lawsuits on behalf of grieving families. Call our Jacksonville personal injury lawyers today to schedule a free consultation and learn more about how we can help.