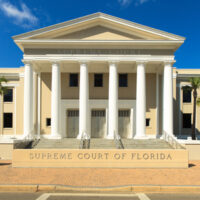 The Florida Supreme Court has agreed to hear two cases concerning tobacco products. Tobacco lawsuits can still be filed today, but there are several obstacles to these types of lawsuits since everyone now knows that tobacco increases the risk of cancer, COPD, and other serious conditions.

These cases stem from a 2006 case that allowed a flood of lawsuits against tobacco companies. These are known as “Engle progeny lawsuits”. The class-action lawsuit levied a verdict of $144.8 billion to satisfy the claims of over 700,000 class members. RJ Reynolds and other companies appealed the verdict. The Third District Court of Appeals overturned the verdict stating that a class-action lawsuit was “not the proper vehicle” for such claims. This overturned a 1996 verdict in Engle v. Ligget. Hence the term “Engle progeny”.

While the court ruled that the class itself was unlawful, they also upheld that several of the findings of jurors nonetheless had merit. This allowed plaintiffs to file individual lawsuits against the tobacco companies but prevented them from forming a single class. Importantly, these lawsuits allowed jurors to assign some of the blame to plaintiffs even though the tobacco companies were found to have covered up information that would have exposed their product as dangerous.

Engle progeny lawsuits are filed under a theory of product liability and assume that the tobacco company’s negligence was both egregious and willful. In other words, victims are awarded punitive damages for the conduct of the tobacco companies.

R.J. Reynolds has settled at least 400 Engle claims, paying more than $100 million in damages. Another 225 Engles claims have gone to trial with 144 of those claims resulting in jury verdicts for the plaintiff.

Today, there are as many as 8,000 Engles claims still sitting in court dockets. Some of them are more than 40 years old.

The first case involves a $6.4 million award for compensatory damages. The defense has argued that the judge overseeing the case failed to properly instruct the jury concerning tobacco company efforts to conceal fraudulent information about smoking. The jury found that R.J. Reynolds was 40% at fault. The main question was: Did the individual tobacco smoker rely on misleading information provided by tobacco companies to continue smoking.

The second case involves a man who received a $5 million award for punitive damages after he died of lung cancer in 2007. In this case, there was some question as to whether or not the pre-1999 punitive damages law was applied and whether that was appropriate.

Let Us Help You Today

If you’ve lost a loved one due to the negligence or malice of another individual or company, call the Jacksonville personal injury attorneys at Gillette Law today to schedule a free consultation and learn more about how we can help.