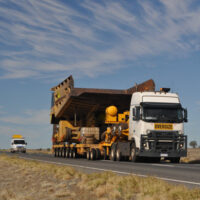 The family of a Texas woman who was driving from one church service to another won a $730 million settlement from the trucking company. According to the lawsuit, she was killed by a 200,000-pound “super-load” truck that was being escorted by two pilot vehicles, one in the front and another in the back.

The plaintiffs contended that the fault was primarily with the lead escort vehicle. They alleged that all of the vehicles were traveling at about 70 mph when they rounded a blind curve near a bridge. The descendant attempted to swerve away from the caravan but struck, but there was a tractor-trailer almost completely in that lane. The driver of the truck was able to swerve his vehicle out of her lane, but failed to swerve the trailer as well. The plaintiff’s vehicle struck the tractor and ripped the top of her car off like a can of sardines. The pilot vehicles exchanged little or no communication prior to facing the curve.

Oversized loads have advanced regulations that require pilot vehicles. Under the law, 80,000 pounds is enough to trigger these regulations. This load was 200,000 pounds, transferring military equipment, and traveling at 70 mph. The law requires these vehicles to travel no more than 55 mph. They are also subject to lane restrictions and other traffic restrictions. In this case, the vehicles were traveling over the speed limit and failed to navigate a blind turn even with two pilot vehicles alerting them to danger. The plaintiffs were able to lay the liability primarily with the lead pilot vehicle that failed to communicate danger as it approached. This failure resulted in the preventable death of another driver.

All you need to know about a case like this is that there are laws that govern super-load trucks and these laws were not followed. The vehicle was driving too fast and the lead driver failed to alert the trailing drivers to impending danger. Hence why the lead driver was hit with a $730 million verdict while the other two companies settled for significantly less.

This is a very large verdict and among the types of “nuclear” verdicts lodged against the trucking industry for causing preventable deaths. Had the rules been followed, the woman would still be alive with her family, planning to go to multiple services next Sunday.

If you’ve lost a loved one due to the negligence of a commercial trucking company, call the Jacksonville personal injury attorneys at Gillette Law today to schedule a free consultation and discuss your options for recovery.