Family Investigating Death Of Teen Who Fell From Ride 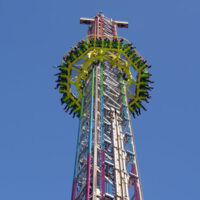 The boy had plenty of scouts looking at him and was already large enough to fit in on the offensive line of our hometown Jaguars. The teen was with his football team enjoying a day at the amusement park when the tragedy occurred.

Lawsuits against amusement parks work as follows. The amusement park is hit with a lawsuit alongside the designer of the ride and both face allegations that an injury or death was caused by their ride. Since amusement park lawsuits are filed under a theory of product liability, the plaintiff does not need to prove negligence to win their claim. However, if they can prove negligence, it catapults their claim from a basic product liability lawsuit to one involving punitive damages based on gross negligence.

In this case, knowing that we live in a world with people who weigh over 300 lbs., the rig should have been crash tested against individuals up to 500 lbs. using dummies. The ride essentially lifted individuals off the ground in their seat, tipped them forward so they were looking directly at the ground, and then dropped them at 75 mph. In this case, the teen was lifted to 430 ft., the strap gave way, and he fell to his death.

That means one of several things. Either the ride was defectively designed, the ride engineers failed to warn amusement parks that the ride was only coded for a certain weight, or no testing occurred to determine how much weight the strap could hold. Or, simply, the individual in charge of the ride never ensured that all of the riders were secured prior to starting.

So, no matter what happened there, it was negligence that led to the teen’s death. Either the ride was defective or the individual in charge of the ride did not ensure the passenger was properly secured. Depending on which it is, both the amusement park and the ride’s engineers will face allegations of wrongful death.

As of now, the ride has been shut down indefinitely pending an investigation into the cause of the boy’s death. The amusement park says they are cooperating with the investigation as the family presses for answers. A lawsuit appears unavoidable at this point.

Amusement park injuries are the sole liability of the park and the ride’s engineers. If you have suffered an injury at an amusement park, call our Jacksonville personal injury lawyers at Gillette Law today to schedule a free consultation and learn more about how we can help.