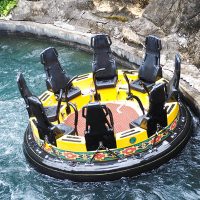 When you try to visualize someone dying at an amusement park, you probably see someone flying off a roller coaster or plummeting to their death (which recently happened here in Florida). But seemingly innocuous rides can also be dangerous and sometimes it’s worse because these dangers are unexpected.

A family has filed a lawsuit against an Iowa amusement park on their raging river ride. The ride consists of a course and raft. Multiple people can use the raft, they’re strapped in, and the course dumps water on them. In one case, however, the raft overturned trapping the family underneath the raft. This resulted in an 11-year-old boy losing his life. The family has since filed a wrongful death lawsuit against the amusement park alleging that they failed to operate the ride safely.

The family alleges that there were several problems with the ride the day the raft overturned. This included rafts striking the bottom of the course and creating a potential turnover problem. Some of the rafts were underinflated and they were pulled from circulation. The raft the family used is alleged to have been one of the rafts pulled from circulation and then ostensibly repaired before being returned back into the fold. However, the family alleges that the company never tested the repaired rafts and this raft issue is what caused the turnover accident which trapped the family.

Another element of this case is that the theme park was sold a few months after the incident occurred. The former owners are named in the lawsuit—not the new owners. This is different because when one company purchases another, they generally incur both their debts and liabilities. But, in this case, the plaintiffs are suing the original company and not the new owners. Problematically, the ride passed a state inspection one day before it reopened leaving many to wonder if the inspection was conducted properly.

Why sue the original owners and not the company?

For many, filing a wrongful death lawsuit is about accountability and not money. It was the original owners who failed to inspect their rafts prior to allowing patrons to enter the park and they may have paid off state inspectors to conduct a cursory inspection and green light a dangerous ride. In these cases, it can be very difficult to hold the government accountable for the inspection because sovereign immunity generally prevents lawsuits of this type. The plaintiffs would have to prove that money exchanged hands or the inspection was not conducted properly due to cronyism. However, lawsuits against the government arising from ordinary negligence are not pursuable according to most state laws. Nonetheless, the inspector looks likely to become a large part of the lawsuit.

If you’ve lost a family member or been injured in an amusement park, the Jacksonville personal injury lawyers at Gillette Law can help you recover damages related to your injuries or the loss of your loved one. Call today to schedule a free consultation and learn more about how we can help.