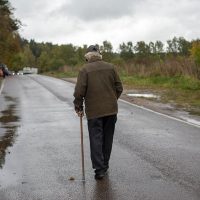 An assisted living facility accused of serving cleaning fluid to two of its residents who later died, is now accused of causing a third death. This death occurred prior to the cleaning fluid incidents and involved staff allowing a memory care patient to wander off the grounds through the front door.

The last lawsuit filed marked the first of three deaths that occurred over a 3 month period, according to attorneys. The facility had been on notice to do more to prevent wandering off the premises after another resident did the same thing.

According to the victim’s son, he visited his father two weeks before the incident and found bruises and swelling on his face. Facility workers were not able to explain what happened to the family. A coroner ruled that the man died of a stroke and other complications after falling down on the ground.

The plaintiff says that he was still getting over the death of his father when he heard that two other residents had been killed after being served cleaning fluid instead of fruit juice. He decided then to file his own lawsuit against the facility.

Who is regulating these facilities?

Allegations related to improper training and a lack of staffing continued with citations being filed and then rescinded after authorities met with the facility’s management. We can only guess what was discussed during those meetings, but the consequences were dire for the facility’s residents.

Who is being regulated?

The victim’s families are now worried that they will never get their day in court due to arbitration agreements signed by residents. Residents who want to sue the nursing home must go through closed-door arbitration according to the contract they signed. This means that the nursing home may be able to prevent the outcome from ever becoming public. Attorneys for the plaintiffs are currently trying to fight this effort.

One of the major benefits of arbitration is that it is not public. In most cases, companies have to pay defendants to seal a settlement. It’s a chit and costs money providing the plaintiff with leverage. In cases where arbitration is compelled, the plaintiff’s leverage is taken away. Do you believe the public has a right to know how these wrongful death lawsuits are resolved?

Gillette Law represents the interests of plaintiffs who are suing nursing homes over neglect and abuse. Call our Jacksonville personal injury attorneys today to schedule a free consultation and learn more about how we can help.