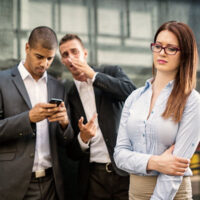 That intro leads into our next article. A family has filed a lawsuit against Activision, a video game developer that has recently been embattled with a series of sexual harassment lawsuits filed by female employees. The allegations against the company culture are outrageous and disturbing. One family claims that the sexual harassment suffered by one employee was so extensive that it contributed to her suicide. They are now suing the company.

Activision is facing a substantial settlement of $18 million that has yet to be agreed upon by the courts. The company was recently purchased by Microsoft who promised to change the “frat boy” culture.

What do we know about this case?

We know that there is a cover-up in place. The suicide occurred during a company retreat. There was an apparent relationship between the woman and a supervisor. When police asked Activision personnel to turn over her laptop and phone, they refused. They said they had wiped both laptop and phone.

We also know that Activision is facing substantial fines related to numerous sexual harassment complaints filed by numerous Activision employees. The complaint is near a settlement with everyone waiting on the court to give the okay for the resolution. The court may, in fact, reject the resolution if only to force Activision to pay more money.

In one case, male employees passed around a picture of the employee’s vagina at a party. A supervisor made significant efforts to hide his relationship to the woman after her suicide.

Is this case winnable?

That is hard to say. This is not your standard personal injury lawsuit because it involves civil rights allegations against the defendant company. The fact that the plaintiff was never physically assaulted thus does not matter. The plaintiffs will allege that sexual harassment and a hostile work environment was a major contributing factor to the plaintiff’s suicide. If true, it would establish a damages award far in excess of most sexual harassment lawsuits.

Secondly, sexual harassment is a security issue. The law establishes that sexual harassment is illegal. Saying something mean to someone is not necessarily illegal. Hence why the plaintiff will be able to file suit against Activision for this set of circumstances. If the company knew about the sexual harassment and did nothing to stop it, they are legally culpable for the consequences up to and including suicide.

The plaintiffs thus have a strong case. Nonetheless, Activision’s defense attorneys will stress other factors that could have contributed to her suicide.

If you have lost a loved one due to the negligence, incompetence, or malice of another individual, you are entitled to recover damages and hold that party accountable for their actions. Call the Jacksonville personal injury lawyers at Gillette Law today to schedule a free consultation and we can begin discussing your case immediately.