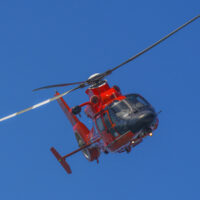 Among the deceased were two company employees who died in the crash and a patient from London.

The Nation Transportation Safety Board (NTSB) is responsible for investigating these sorts of crashes. The allegations are not good. The NTSB blamed the crash on a “lax safety culture,” but specifically, the pilot failed to perform a pre-flight evaluation of the conditions prior to accepting and then attempting the flight. Both companies expressed remorse and sadness over the deaths. Survival Flight said that it has learned from the incident and has employed changes recommended by the NTSB.

We can skip past the part of the article where we determine the merits of the suit. Having a government agency call out a defendant prior to the settlement for safety failure is like a straight flush when it comes to the law. It’s a nearly unbeatable hand. So the only question left to resolve is damages.

The last element of this case to discuss is whether or not the companies will be held liable for punitive damages. In cases where there is an extended history of major safety lapses, punitive damages based on allegations of gross negligence are appropriate. Essentially, these companies put their employees in a position where such a preventable death was inevitable.

How Do I File a Wrongful Death Lawsuit?

Call the Jacksonville personal injury lawyers at Gillette Law today to schedule a free consultation and learn more about how we can help.