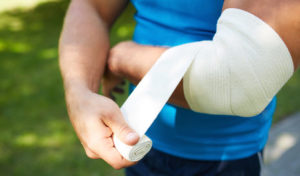 It is generally accepted under the law that a person is liable for the injuries caused to another, even though the other person had a pre-existing condition that made the injuries worse than if a different, healthier person had suffered the same injuries. This is referred to as the “eggshell skull” rule, and it means that a person who causes an injury cannot use the victim’s ill health as a defense to his negligence. However, when an injured person’s injuries become worse than they should have been because of some action the injured person took or failed to take, the person who caused the injury may use this as a defense to any additional injury the person suffers.

When a person suffers an injury, he has a duty to ensure that he takes reasonable steps to attend to the injury and try to avoid it becoming worse than it has to be. This is referred to as a duty to mitigate and presents a defense for a person accused of negligence in causing the initial injury. If the person sued for negligence can show that the plaintiff’s injuries are much worse than they should have been because of the plaintiff’s actions, the award against him for the plaintiff’s injuries may be reduced.

Under Georgia law, a plaintiff is specifically required to mitigate his damages. For example, if a plaintiff knows he had suffered a serious injury after a car accident, he should seek medical attention as soon as possible to avoid the injury becoming worse. If the plaintiff’s delay causes the injury to go from needing minor medical intervention to needing surgery, the person who caused the accident may not be found liable for the surgical costs if they are deemed to have been reasonably avoidable.

A plaintiff’s failure to seek necessary or reasonable care can be considered negligence and can affect the amount of compensation the plaintiff can receive in a personal injury case. In Florida, if a plaintiff is found to have contributed to his injuries in any way it does not stop plaintiff from recovering or receiving compensation for the injuries but it does diminish the amount of the award in proportion to their percentage of fault. However, in Georgia, if the injured person is considered to have been more than fifty percent at fault for their injuries by failing to seek medical assistance, then he cannot recover any compensation.

Most people do not refuse to seek medical assistance or take other reasonable steps following a serious injury because they want to make their injuries worse; there are often reasonable explanations for their actions. It is also difficult to determine what steps would be considered reasonable for a plaintiff to take after a serious injury and can vary depending on the injury. In order to get a better idea of how your actions, after suffering a serious injury may have affected your case, you need to speak to an experienced personal injury attorney. For a free consultation, contact an experienced Jacksonville, Florida personal injury attorney at Gillette Law, P.A. We can guide you throughout each step of your case.